The Story and its Writer 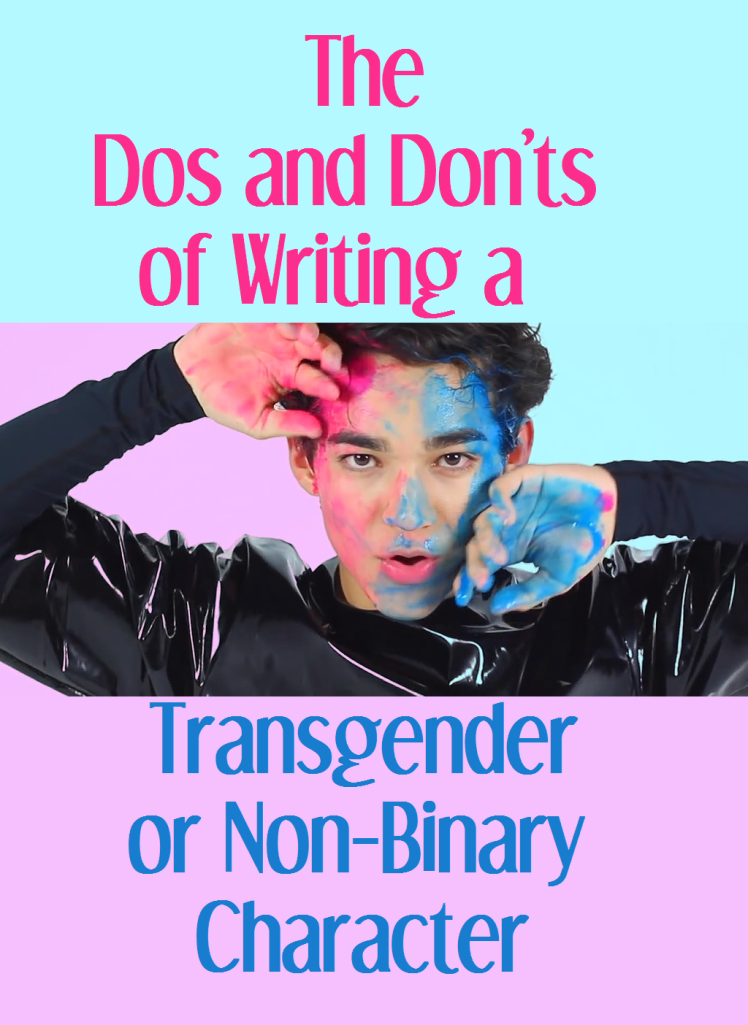 DO: Respect the pronouns

Misgendering is a big deal. Depending on the person, it can result in anything from annoyance or discomfort to full blown panic or anxiety attacks. People’s pronouns need to be treated with respect, both in real life and in fiction.

There are three times people get misgendered in fiction: 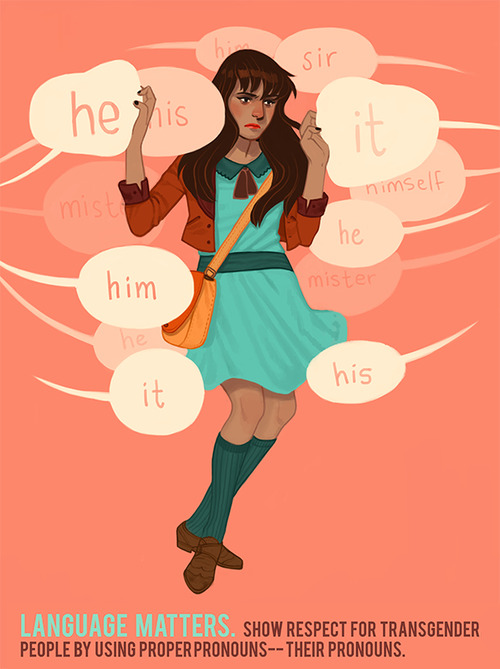 DON’T: Treat them as though they were raised as their gender

Being raised in a binary society, people are taught specific things and expected to behave a certain way based on their assigned gender. People who are raised as girls are taught cooking, are given dolls and dresses, and are called cute and innocent. Boys are taught sports, play with action figures and cars, and are expected to be handsome troublemakers. It very much effects how people think when they get older, even if they realize young that they are trans.

A large issue seen in books is the assumption that all trans people will deny their gendered expectations in their childhood. This is not true. Things like toys and clothing are not gendered naturally; girls don’t instinctively wear dresses and boys don’t naturally shy from skirts. These are things that are taught, rather then being intrinsic to a binary gender system. In fact, there have never been scientifically proven reasons for the differences in attitudes and aptitudes in the genders, neither in hormones or brain formation. While these things can have effect, there’s enough overlap and variation to assume that it all comes down to nurture, rather than nature.  This is especially true when we look at the many cultures that have three, four, or even more genders, rather than a binary.

Equally problematic is the assumption that all transgender people know that they’re trans from childhood. This is equally untrue. There are people who don’t realize or accept it until they’re teens, young adults, or even in their later years. There’s no such thing as too old to come out as transgender. I myself didn’t come out until I was 20 years old, partly because the family I was raised in didn’t talk about such things, and so I didn’t even know it was a possibility. Make sure to take one’s background into account when creating a trans character.

DO: Make the characters more than just “the trans character” or a stereotype

People are more than just their gender. Having token characters is offensive no matter what group you’re dealing with. Characters should have more to them than their identity, from motivations and hopes, to individual likes and dislikes, to a personality that goes beyond stereotypically masculine or feminine. Trans women do not have to like all things girly, and trans men don’t have to be the very definition of masculine. A trans woman is rarely depicted in pants and a t-shirt, because they are always expected to be in skirts and frills and lace; a trans man who isn’t into sports and video games is equally unheard of. However, in real life, this is far from true. Transgender characters should be people first, trans second.

DON’T: Make the only trans character the antagonist or the victim

Both of these ideas are common, and both are offensive. To make the only transgender character a criminal or antagonist creates the idea that trans people as a whole are villains, setting an entire community into a bad light. It’s doubly worse if someone’s identity in some way causes them to become violent or evil, either due to psychological effects or past mistreatment due to their identity. Alternately, it’s just as bad to make the only trans character a victim, which happens especially often in crime and mystery stories, shows, and movies.

You can have a transgender antagonist or victim. It’s not at all out of the question. Just make sure to have other trans characters in the story with roles and lives beyond villain or victim.

You also need to avoid a great multitude of the typical bigoted depictions that are commonly used. Some of these would be depicting trans people, especially women, as overly sexual or perverse, naturally violent, or as victims of sexual abuse (which, in often times, is accounted as part of the “reason” that they’re trans in the first place.)

DO: Research and understand methods of transitioning

One of the biggest issues in stories about transgender characters is a prevalent misconception about transitioning: that all transgender people want to transition in every possible way available to them. In fact, there are three main kinds of transitioning — hormonal, surgical, and expressional transition — and many trans people chose to only undergo one or two of these.

Surgical: Surgical transitioning includes subcutaneous mastectomy (breast removal), penectomy (removal of the penis), orchiectomy (removal of the testicles), metoidioplasty (changing the clitoris into an approximation of a penis) or phalloplasty (creation of a penis from skin grafts), vaginoplasty (creation of a vagina), and mammoplasty (breast implants). These surgeries are generally collected under the terms top surgery and bottom surgery. Not every trans person will opt for every surgery available, or even any surgery. (Especially common are AFAB trans people who decide to not get bottom surgery, as they are not yet reliable nor do they have particularly realistic results the way vaginoplasty and top surgeries do.)

Expressional: Transitioning in outward expression is most often the first transitional step taken, but not always. This includes growing out or cutting hair, starting or stopping use of makeup, changing the wardrobe and using clothing items like binders (vest-like tops that bind the breasts to make them flat) or gaffs (worn under the pants to tuck the penis and testicles out of view) to make the body look more feminine or more masculine. Trans women often also go through lazer hair removal, since hormones don’t stop the growth of facial hair on their own (or because they don’t want to transition hormonally).

It’s also important to treat post-transition correctly. For one, it’s not a sudden fix, the flip that they can switch to make everything in their life better. As well, there are going to be scars left behind, most obviously being scars on the chest from FtM top surgery. Just like any other scar, these can be something the person shows off proudly, something that makes them uncomfortable, or anywhere in between; it’s entirely dependent on their individual personality. Lastly, it’s a long and expensive process, and is not to be taken lightly or treated as trivial or superficial. 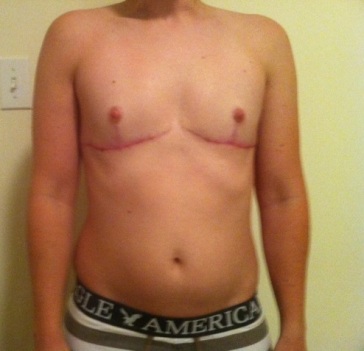 Some writers seem to like to not reveal the fact that their character is transgender until far later in the story. At best, this is a well-meaning attempt to show that the character is no different from any cis member of the gender they identify with, and at worse, they use it as a “gotcha” surprise, making a joke of it. The latter is clearly not okay — using someone’s gender as a joke and revealing it for humorous effect is offensive and demeaning — whereas the former isn’t as clear cut. The main problem here is that transgender people, and therefore transgender characters, are different than cisgender characters. We were raised as the gender our bodies conformed with at birth (or were made to conform with, in the case of intersex people) which oftentimes result in habitual things that slip into our lives; despite being a man, I sometimes still find myself making my voice go higher instead of lower pitched when dealing with formal situations. AFAB and AMAB people also are taught how to do different things and have different expectations put on them; many transwomen have a hard time with things like braiding their hair at first since they weren’t taught how to do so when they were young. Unless your character realized they were trans as a young child and had supportive parents from the get-go, they’re more than likely going to be dealing with this.

Mind you, that’s not to say that you have to have your main character know from the start. And if you want to reveal it to the reader at the same time the protagonist learns it, it’s certainly possible. You just need to make sure there are hints in the earlier part of the story, little things they did that the reader could go back and point to. Otherwise it will either feel like you decided while in the middle of writing that they would be transgender and just didn’t want to go back and fix the earlier parts.

DO: Make sure they transition in a healthy way…

…or make it clear that what they’re doing is unhealthy if they have no other choice. This includes, but is not limited to: 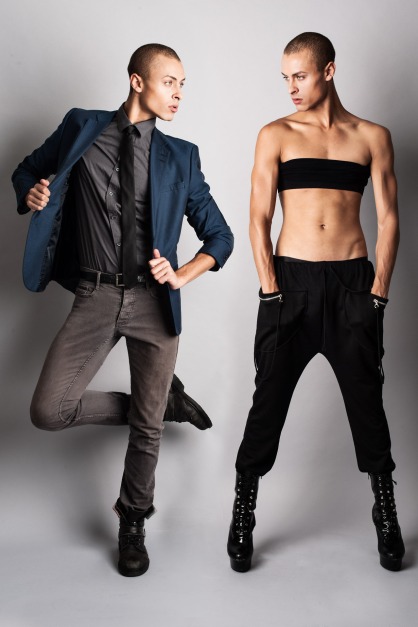 DON’T: Make it just another hallmark ending or a sob story

Almost every story about a trans character ends either with the character dead or miserable, or with them somehow making everything in their life suddenly okay. The former should be left up to writers who have actually experienced such traumas, or as biographical non-fiction pieces, while the latter is unrealistic. If the character has been dealing with unsupportive family, while some might come around, it’s unlikely that every member will. If they’re dealing with problems at work, legal issues, transitioning, etc, those things can have perfect endings, but rarely do. Coworkers sometimes refuse to stop misgendering you and at best they’ll end up fired for discrimination. Laws at the moment are not often on the side of the transgender community and even if a trans character would win the case, you can bet some serious issues came up first. And transitioning can end wonderfully, but there will be pain, probably scars, and having transitioned is not some magical fix for all the other issues that come with being trans. Make the ending realistic. 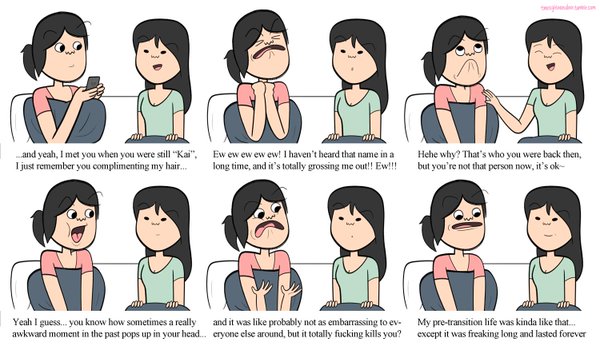